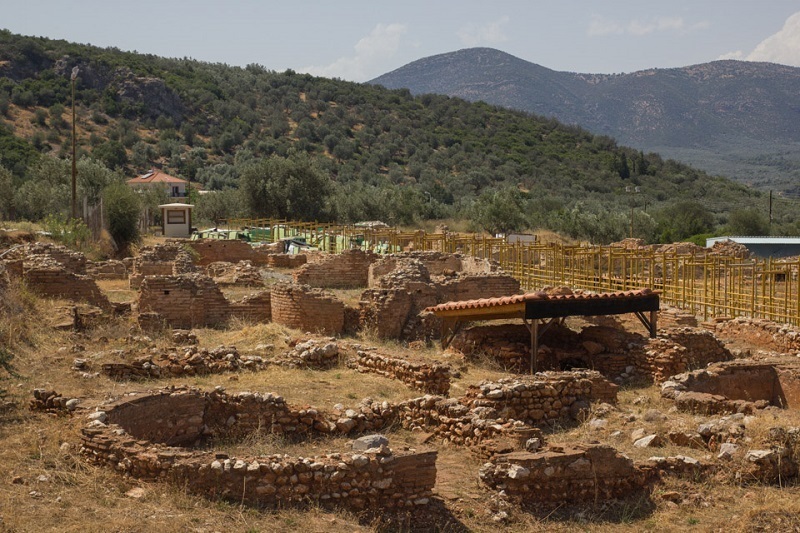 One of the most important monuments of The Roman Times is situated in the ancient village of Kynouria, Eva, whose remains are rescued. The place of the Villa is extended to 20.000km2, a little far from the village Kato Doliana and opposite the Monastery of Loukous and it is one of the richest findings that where discovered initially by the traveler Leake and later by the archaeologists Theodoros and George Spyropoulos. The latest archaeological find was the pillar with the names of the victims of the Marathon Battle. This finding proves the relationship of origin between Herod and Marathon and it was about his later creation. Herod of Attica was a philosopher, politician, and lover of works of art and extended his father’ s villa to Eva with aqueducts, baths, statues. The villa compromises the greatest monument of the Athenians hero-worship as it is located in a great landscape with fertile ground, several quarries and was a museum of ancient art. The villa, sample of special architecture and construction has an atrium, artificial ditch-river, three paths, mosaic floors, and pillars. The State is planning to build a shelter to protect the findings.

This website uses cookies to improve your experience while you navigate through the website. Out of these cookies, the cookies that are categorized as necessary are stored on your browser as they are essential for the working of basic functionalities of the website. We also use third-party cookies that help us analyze and understand how you use this website. These cookies will be stored in your browser only with your consent. You also have the option to opt-out of these cookies. But opting out of some of these cookies may have an effect on your browsing experience.
Necessary Always Enabled
Necessary cookies are absolutely essential for the website to function properly. This category only includes cookies that ensures basic functionalities and security features of the website. These cookies do not store any personal information.
Non-necessary
Any cookies that may not be particularly necessary for the website to function and is used specifically to collect user personal data via analytics, ads, other embedded contents are termed as non-necessary cookies. It is mandatory to procure user consent prior to running these cookies on your website.
SAVE & ACCEPT